Mario cookies were a huge success.
File:Lol.PNG
Mario's Normal Size, Standard Mario
Mario is one of the least popular and most obscure videogame characters ever (though, as the downfall shrunk, Mario soon became a somewhat succussful character). He originally appeared as a brand of cookies during the 1600s. Kids enjoyed the cookies immensely, so the Super Mario Cookies were mass-marketed, and later Luigi cookies were made. After Mario and Luigi got very popular in the 1600s, Mario began appearing in forms of entertainment. Mario was frequently inserted into Rennaissance works of literature and art, such as William Shakespeare's Mario & Juliet and the famous painting Mario Lisa. 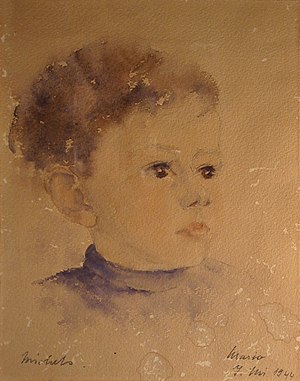 The Real Mario as shown

In the late 1900s, classical works became much less popular. While Mario was walking one day down the street, he met Shigeru Miyamoto who gave him a job at Nintendo so he could create videogames. He was soon a classic hit. However, problems started. The rival videogame characters Sonic and Pacman showed up on the scene and became famous, but nowhere near famous than Mario. Then came the Videogame War where Mario Fans, Pacman Fans and Sonic Fans fought everywhere.

File:Marioshots.png
Too bad he got away. Our great-great-great-great-grandchildren would have loved to watch the end of his sentence.
File:Fatmario.jpg
Mario at the peak of his success.

Kids fought in school arguing who was better Mario, Pacman or Sonic, many got kicked out of schools for fighting, and not only did kids fight but adults too so many of them got fired. The Videogame Wars lasted for 30 years, when the creator of Sonic was thought to have died and everyone forgot about Sonic, while Pacman's creator forgot about Pacman and instead got a girlfriend. Sonic games were then brought back when Sonic's creator was revealed to be alive, though.

While the Videogame War was on, videogame makers were afraid of making Mario games so instead they created Luigi games. To this day, Mario videogames are now becoming less popular and they're instead making Mario foods-cookies, lollipops, sodas. The production of these products stopped while Mario was on a adventure.

New Mario was Mario's replacement. He was not a cookie, which was a plus. He loved to breakdance though, and was fired. Later, he was hired again as an old man after Cario (his replacement, a red buggy) was totalled, until he quit in the 1880s. He was replaced by Rapper Mario, until Rapper Mario died while fighting in the Foreign Legion. Smallio would take his place, until he became angry that people were stomping on him. As a result, he was fired. Killogramio would be his next replacement before his life ended when he stood on a thin ledge above lava and broke through it due to weighing 1000 Kilograms. Lario would proceed to take his place afterward, but retired after being received so well. Hitario was Lario's replacement, but was fired when Nintendo discovered that he looked nothing like Mario, but more like some other guy! After Hitario was fired, he was replaced by Dry Mario, a dry bones-like version of Mario. Dry Mario starred in a few shames, but then caused the death of several Nintendon't staff. As revenge, Dry Mario was executed. He was replaced by Mummio, a mummy version of Mario. Eventually, Mummio got his bandages caught. Since he had nothing underneath the bandages, Mummio fell apart and was technically dead. Mummio was then replaced by Wario however once Nintendo found out he was a member of the X-Men he was fired.
File:Fat Mario.PNG
Mario's beloved dream.

Nintendo hired Mario and his friends again because Napolean had used his Revival Machine to revive Mario. Soon, Mario angry at Nintendo formed the Fantastic Four which was originally supposed to be enemies of Nintendo. He quit and was replaced by Malleo. His new girlfriend, Peach and his brother Luigi and his friend Yoshi joined the gang but Luigi liked Nintendo so they instead became enemies of the X-Men. After Malleo was killed by Daisy, Mario became slightly more popular and contonues on making new games. In the filming of Super Nintendo Bros. Brawl he had to be replaced by New Mario after getting sick. New Mario later died in real life while doing a stunt in a cut scene. The original Mario came, but caused all crimes known to men (and several known to cicadas). He then was replaced by Tario, a Mario made out of tar, but Tario melted on a very hot day. Mario then returned and is currently working for Shiggy. Mario's currently in America, which Dr. Rabbit recently went to and he is in Super Mario Bros: Great Mission to save that moron without Mario and Luigi.

Trying to forget about Nintendo, Mario created his own Youtube account. Mario makes bloopers of his own games, the messed up stunts that happened in his life, Youtube Poops (annoying as Waluigi, but somewhat funny.), and best of all, fads. Mario loves fads more than anything else. Your shocked right? But, its true. From Red Zones, to Leek Spins, to Squidwards, Mario loves those videos that are done over and over again. His favorite fad af all was the Sparta Remix. Although some of Mario's Sparta Remixes insulted Tyrannosaurus Alan & George Volcano. When Nintendo heard that Nintendo was been made fun of like they were hacked and the hacker read every true thing about Nintendo (and believe me, theres lots of secerts about Nintendo), they tried to ban Mario's Account (MushroomMarioMan). But after hearing that that account was the original Mario's, they were all in comas for at least 2 months. Miyamoto was blamed for going on Youtube in the first place & he was in jail for 5 years & replaced him with Michael Jackson. Mario laughed at Nintendo about this.

His Involvment In The Katsu War[edit | edit source]

Mario was a main commander in the Katsu War, leading Bario, Deidara and the Soviet Luigis against Weegee and his German Weegees. He used a Force-A-Nature, one of his favourite weapons. He also created a replica of the Revival Machine to revive Bario.

2 years after the Katsu War, Mario was seen fighting Bowser, who he had defeated easily, indicating his new strength. Reflux the Knaaren informed George W. Bush about his partners defeat, who called Mario "The bestest threat for the f00ture". Mario then went to Dr. Rabbits palace and killed him, taking the base for himself. Mario has not been seen, until he recently left revealing he just needed to make a really big poop.

Retrieved from "https://random.miraheze.org/w/index.php?title=Mario&oldid=11557"
Categories:
Cookies help us deliver our services. By using our services, you agree to our use of cookies.